Coming up in Somerset... 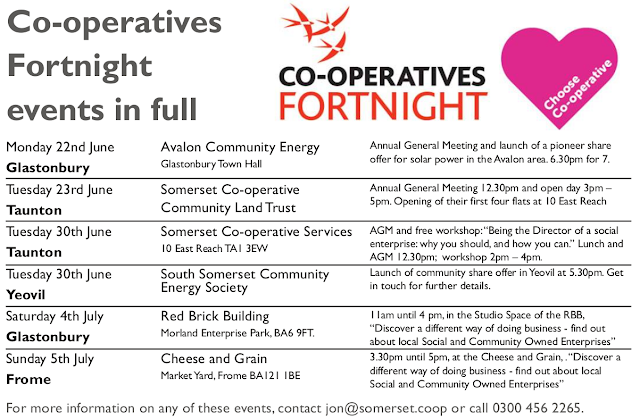 All this and much more is available in our latest newsletter - click to download!
We have more news about co-operatives making creative use of Seed Enterprise Investment Scheme; training for Directors of social enterprises; and how Tinkers Bubble is securing their site for the future.

The Co-operative Identity in the UK - a disagreement in the co-op family?

Two very interesting consultations are underway at the moment. Here, we have Co-operatives UK continuing its negotiation with the FCA with aconsultation on the co-operative identity; and here, the ICA is asking everyone's views on its interpretation of and commentary on the famous co-operative principles.
On one point, there are signs that these two key organisations for UK co-operators might be heading in different directions. Co-ops UK says:
"If the FCA is to consider participation in any way, high value should be attached to participation through ownership, democracy, capital contribution... The FCA is right to focus on preventing the co-operative form being misused
as an investment vehicle, but should focus...on cases where rates of return [are too high]" The implication appears to be that in Co-ops UK's view, there is no difficulty in mutuals being investor-led.
Meanwhile, the ICA is saying this: "...if members are not users of a co-operative’s services, the reasons for them not being users should be analysed and their right to remain members should be considered... [in] hybrid co-operatives that merge two organisational models [co-operative and investor ownership]... consideration also needs to be given to, what, if any, are to be the voting rights of non-member [ie non user] equity shareholders..." So the ICA seem to be saying the opposite: you cannot normally qualify for full voting membership unless you participate (ie use the services) in some way.
Our approach has generally been more like that of the ICA: we think non-user membership, with strictly limited voting rights, is best for people who bring valuable things to a co-operative but do not in fact depend upon it as its stakeholders do. What do you think? Anyone can respond to those consultations.
[Update: Co-ops UK have told me that they have altered their consultation to stress that "it is possible for members to benefit from the activities of a co-operative in meaningful non-financial way without them having to participate in direct economic exchange" and 'do not advocate investor only relationships'. This is good, but there are still signs that they might be willing to tolerate them.] 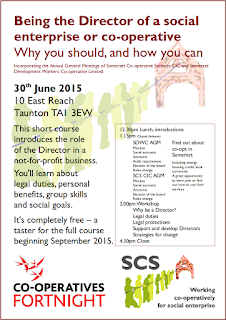 If you've ever thought the word 'Director' suggests a mysterious world of high finance, dubious ethics and smart suits, we hope we can reassure you - it's a job for anyone, regardless of skills or background. And social enterprises need more of them!
This short training session (coinciding with our AGM, which you're also very welcome to attend) will give you a solid grounding in both the legal and practical expectations of Directorship. It's also important to know how to get the best out of it - for some people it can help build skills, confidence and careers.
Please spread the word about this completely free session - and if you enjoy it we'll be going into more detail with a series of monthly workshops from September.

Save money with a co-operative utility provider

Cheaper broadband and fairer tariffs from

Get funded advice through the Hive

Our mission is to promote the application of international co-operative principles, to help people establish new social enterprises and to enable social enterprises to work together to be financially, environmentally and socially sustainable.
Phone: 0300 456 2265
Email: services@somerset.coop

This work is licensed under a Creative Commons Attribution-ShareAlike 3.0 Unported License.